The 2016 Campus Life Awards were held to acknowledge the clubs that went above and beyond to create a strong presence at UC, were passionate about engaging their members, and led their committee with resilience and patience.

Runners Up – The University of Canberra Drumming Club

The Drumming Club was created to allow a disabled man to experience university life and meet new people. After learning to play the djembe (an African drum), the club now holds regular drumming sessions every Wednesday for people to join in and play along. Well done, UC Drumming!

Enactus UC started with the goal of creating a community that undertakes projects based on social impact. Within the first 8 months of operation, Enactus has completed over 1000 volunteering hours, recruited 20 members, and completed 4 small projects in the Canberra community. Enactus Canberra also attended the Enactus Australia National Conference in which they got the opportunity to participate in the New Teams Competition, which led to Enactus Canberra being named the Best New Team for 2016. They have also started working on their first major project, The School Beans Program which will be implemented in early 2017.

This year Isaacs Law Society designed and ordered brand new hoodies for their members. Not only are they exceptional in quality, the hoodies have also played a significant role in increasing member engagement, positive association with the society, and heightening awareness of the society across campus. Feedback has shown that an Isaacs hoodie gives members a sense of pride. Well done, Isaacs Law!

‘What Do You See?’ campaign.

The ‘What Do You See?’ campaign was developed to gain the attention of students and others on campus. It is interactive and a great way to gain attention and generate buzz. The campaign is about Enactus UC’s first major project, the School Beans Program which aims to reduce youth unemployment by building and maximizing the participants' human assets, personal, financial, and physical assets through a hospitality-based program.

On Campus Event of the Year

Off Campus Event of the Year

The Amazing Race: Lost in Indonesia

The Amazing Race was a free event held in collaboration with the UCISS and the ANU Indonesian Students Association. The event aimed to introduce the culture of Indonesia to non-Indonesian people in Canberra and to tighten the bond among the committees as well as the participants. The race took participants across the UC and ANU campuses looking for clues containing information relating to Indonesia.

Faculty Club of the Year Runners Up

The UC Nursing Society has seen a record number of new members this year and a huge increase in student engagement in both club activities and ongoing committee roles. UCNS’ on campus presence has heightened and has helped them connect with the Alumni office, study abroad and distinguished alumni. UCNS has come very far this year; all while overcoming numerous challenges as a club. Well done UCNS!

Social/Cultural Club of the Year Runners Up

This year has been an incredibly successful year for the Isaacs Law Society with an impressive program of events including the Careers Fair, the Law Ball, numerous competitions and professional development lectures, information sessions, and workshops. Isaacs Law Society has ensured their program of events incorporates all aspects of a university experience including social, professional, and educational events. On top of all of this, Isaacs has successfully rebranded to a more recognizable and professional image, while maintaining a healthy financial position through investing in long-lasting and secure relationships with industry partners and sponsors. Well done, Isaacs Law Society!

Social/Cultural Club of the Year

The Thai Club has grown from strength to strength this year and achieved many wonderful things while representing the University of Canberra. The Thai Club has had many opportunities off-campus to represent the University including the Thai Interstate Games, a dinner party at the Royal Thai Embassy, and various events in collaboration with the embassy. On top of all of that, the Thai club has shared their culture on campus effectively through various events including Thai cooking and language classes, dance performances, and a Thai food festival. Congratulations, TSCUC!

Alicia has strengthened the CaSPA team and created greater engagement within the club this semester. On top of this, Alicia has developed a strong and formal relationship with the Health Faculty that will only continue to grow in years to come. Alicia has also developed a connection between CaSPA and the National Australian Pharmacy Students Association that ensures CaSPA will become more involved nationally with an opportunity to represent the University and also present students with a professional development and networking opportunities. The inclusive and engaging environment of CaSPA is due to Alicia and her dedication to the club. Congratulations, Alicia!

After finishing up her tenure as the President of the Thai Student Club, Tatsanee now devotes her time to helping grow the Thai Student Club. Tatsanee acts as the advisor between the club and the Royal Thai Embassy in Canberra, and is an advisor for the new leaders of the club to help them correctly and efficiently do their jobs. Tatsanee is a kind person and without her contribution to the club, the Thai Student Club would not be recognised as widely within the community. Congratulations, Tatsanee!

As the Founder of Enactus in January 2016, James has created countless opportunities for over 90 volunteers to make a difference in the Canberra community. James has established partnerships between Enactus and Questacon, Communities@Work, Innovation ACT, Canberra Innovation Network and EntrepreneurshipUC. James’s tireless work is one of the reasons Enactus has had such a great first year of running and thanks to James, Enactus’s longevity as an affiliated club with UC can be assured. Congratulations, James! 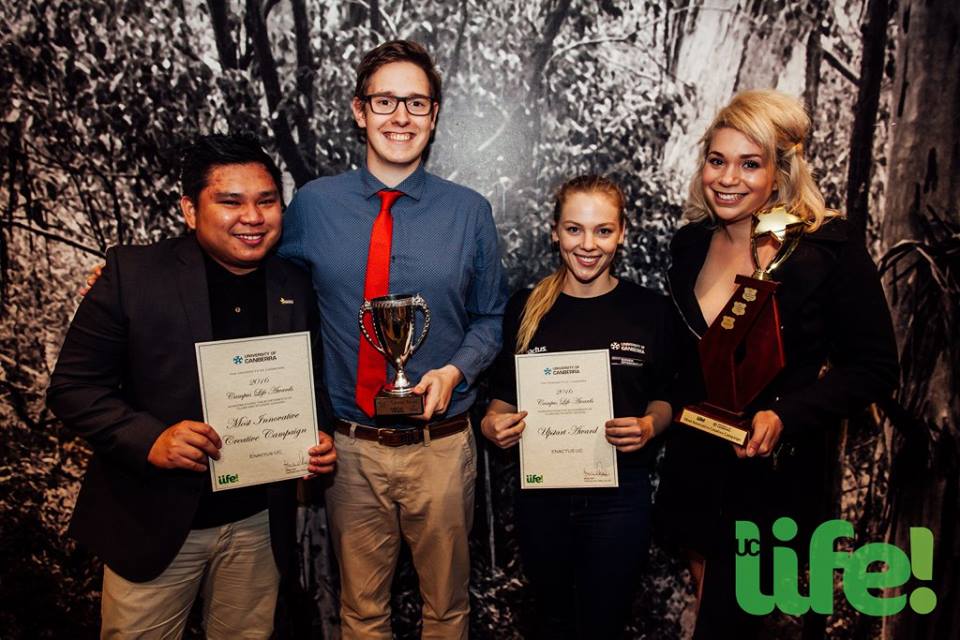